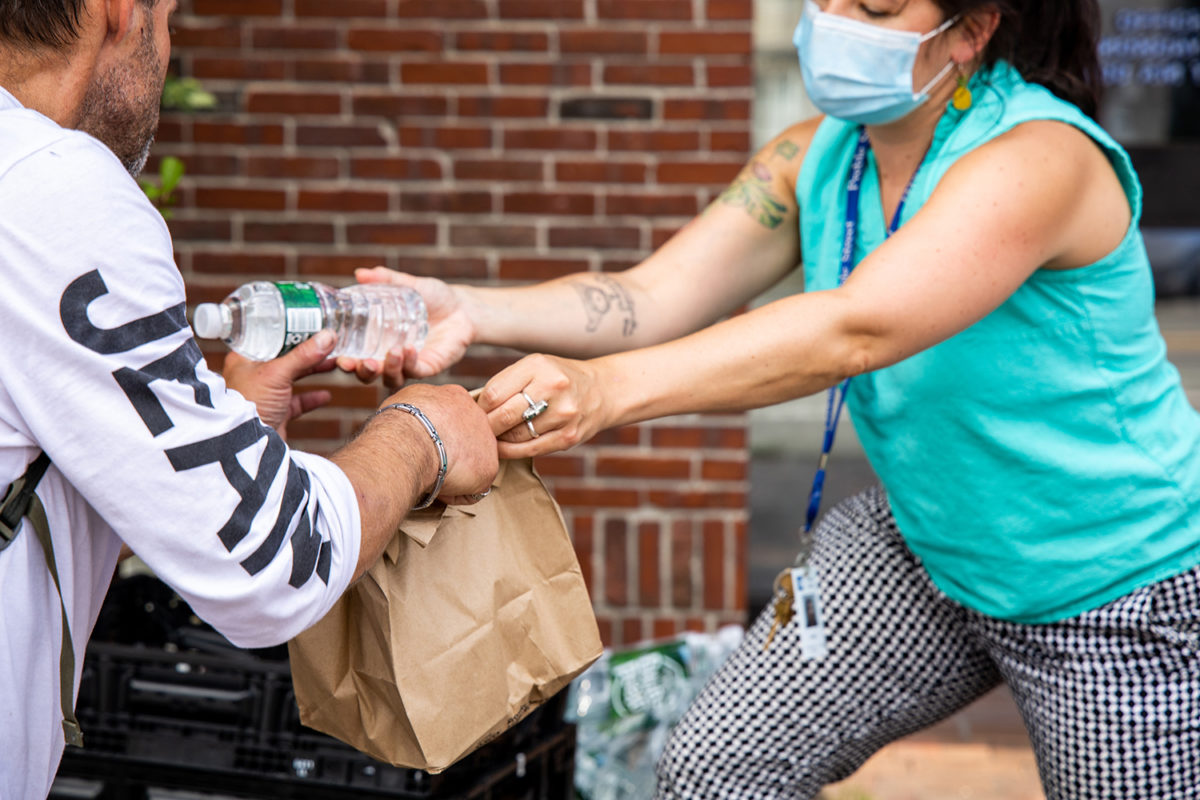 Since its founding, Preble Street has a history of responding to emergencies in the community: the Ice Storm of 1998, the closure of other Portland shelters in 2004 and 2007, the economic recession of 2008, and the unexpected arrival of hundreds of asylum seekers in 2019, to name just a few. With each crisis, it has evolved its barrier-free model to address new challenges for Mainers experiencing homelessness.

The COVID-19 pandemic has been no exception. The John T. Gorman Foundation recently awarded Preble Street a $100,000 general operating grant to support its efforts to help homeless Mainers through a perilous time. True to its history, Preble Street is once again learning from the crisis to improve outcomes for the people it serves.

‘A disaster waiting to happen’ forces shift in operations

Several factors make homeless individuals especially vulnerable during an infectious disease outbreak – including the crowded settings in which they are traditionally served, said Preble Street Executive Director Mark Swann. “For decades, the thinking has been to get as many people as we can off the street with four walls and a ceiling,” Swann said. “Well, it’s not keeping people safe if we’re cramming in far too many people in very small spaces that are poorly ventilated and impossible to do any kind of social distancing.”

The setup of homeless services in Portland worsened potential issues, Swann said. The overnight shelters where many people stayed would close during the day. Hundreds of individuals would then come from all around the city to Preble Street’s day shelter and soup kitchen to access food and other resources.

“You were actually taking people congregate living in various places and moving them into even more congregate eating. So it was just a disaster waiting to happen.” Swann said. After several infectious disease experts told Preble Street there was no way to ensure the safety of clients, volunteers, and staff, Preble Street decided to close its day shelter and soup kitchen last spring.

Preble Street shifted quickly to feeding people where they were staying – preparing and delivering meals to city shelters, sober homes, and gathering places for unsheltered groups. No longer relying on people’s ability to come to the soup kitchen, the number of meals delivered over the last year has increased significantly, from 65,000 to 100,000 a month. Outreach has increased as well, with staff social workers making deliveries and offering help with securing housing, jobs, and behavioral health services.

At the same time, Preble Street has increased its capacity to provide overnight shelter from 64 beds before the pandemic to about 300 currently. Last summer, it operated a temporary shelter for 50 residents at the University of Southern Maine Sullivan Gym. Now, it continues to operate temporary shelters at hotels in Greater Portland, and others for people in quarantine, veterans, and families.

Finally, as vaccines have become available, it is working with local partners like Greater Portland Health to get vulnerable clients vaccinated.

Learning from the emergency

Swann said the pandemic has made Preble Street fundamentally reassess its thinking, operations, and plans. Personally, he said he will never look at shelters the same way again.

“What I’ve said for years is that the solution to ending homelessness is not shelters. I’m never going to say that again,” Swann said. “We saw that shelters are in fact a very important part of a public health infrastructure. Shelters are not just keeping 40 people safe; they’re also keeping the entire community safe during a pandemic.”

Moreover, Swann said the pandemic forced positive changes to the shelter model. Preble Street saw the potential for greater success while operating the summer shelter at USM. To limits crowds and gathering, each resident had a dedicated bed, more space, and more autonomy on how to spend their time.

“We found that people responded really well to that. There were people who had been on the streets for years whom we had trouble building relationships with and opening doors for. Suddenly, they were open to talking with us, open to working with a social worker on getting out of the shelter,” Swann said, attributing the difference to the less hectic and intense environment. “People on the street have experienced a huge amount of trauma. Staying in a crowded, hectic, loud shelter, with no privacy was retraumatizing them unnecessarily.”

The realization means that Preble Street will not return to the way it operated before, even after the pandemic ends. Instead of reopening its day shelter, it will continue to bring food and services to where people are out in the community. And it plans to convert its main building into a shelter for 40 residents, trying to replicate the conditions and success it had serving chronically homeless individuals last summer.

Even as the end of the pandemic emergency seems within sight, Swann said another crisis is sure to come – and that Preble Street will be there to help the community through it.

“I think we’ve learned to be ready as an agency to expect the unexpected. There are times when we’re going to have to move very quickly. And it is our responsibility to do so,” he said. “In a way, we plan for the unplannable, because it’s happened to us so many times, shame on us if we’re not prepared.”