This Data Glimpse describes Maine’s unemployment situation in 2020, drawing on the finalized annual average unemployment data released by the U.S. Bureau of Labor Statistics (BLS) on March 3, 2021. While the BLS releases preliminary labor force statistics monthly, annual revisions are released once a year with updated monthly estimates and annual averages for each state and region.1 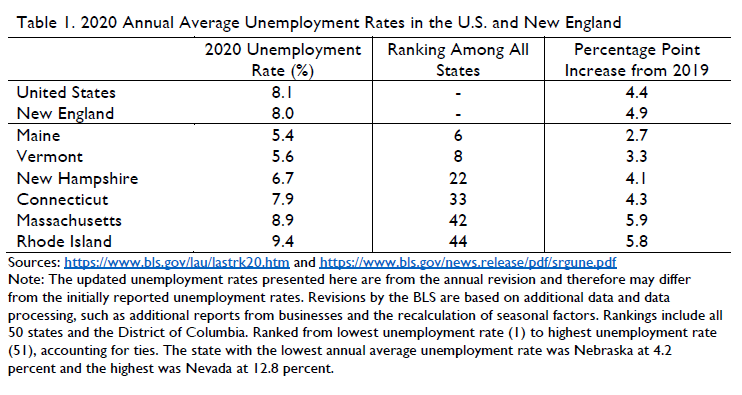 Although Maine fared well compared with other states, the state’s 2020 unemployment rate was still double its 2019 rate of 2.7 percent. This also marks the first time annual unemployment rose since the end of the Great Recession (Figure 1). 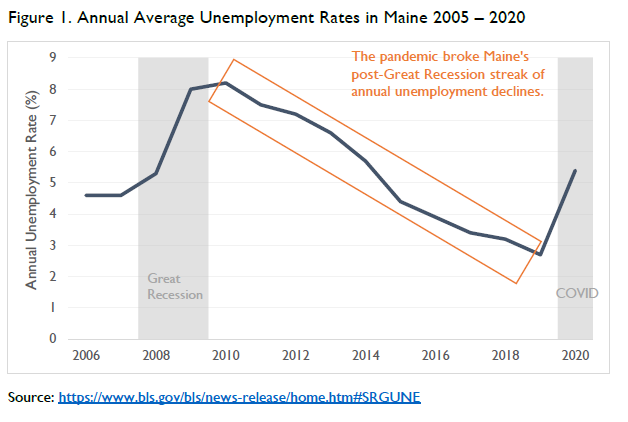 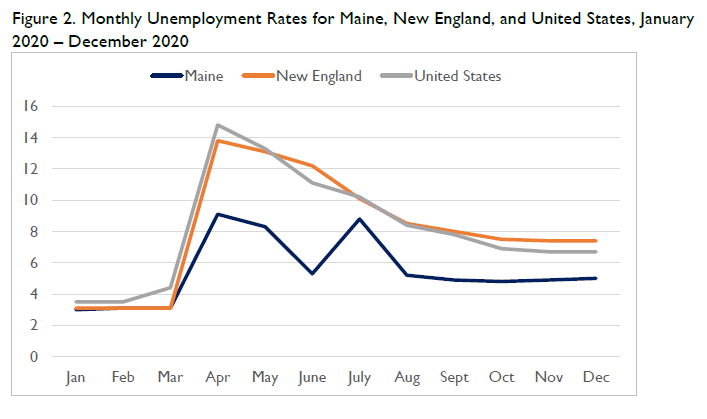 Although Maine also had a sharp unemployment increase in April, the state did not experience the smoothly declining rates of the region, instead experiencing a second spike in July. This spike, driven by substantial job losses in Maine’s Manufacturing sector related to a shipbuilders’ strike in Bath, was quickly resolved, and by August, rates had leveled out to near 5 percent for the rest of the year. Maine’s April and summer unemployment spikes were echoed in other New England states, and although Maine’s annual average was especially low, both New Hampshire and Vermont finished the year with lower December unemployment rates than Maine. 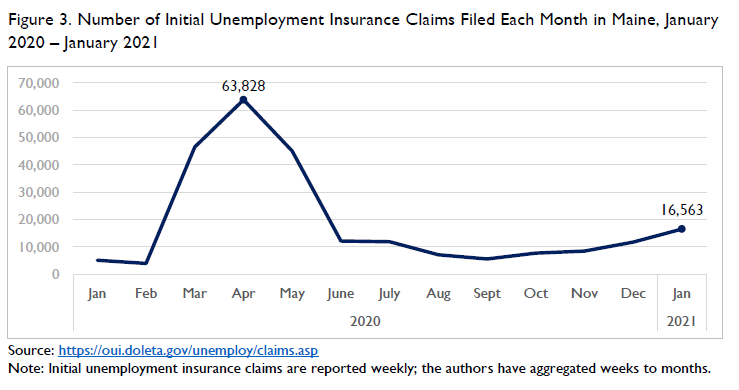 These revised and annualized data confirm several key factors about how pandemic-related joblessness has played out for Mainers. First, unemployment was wildly uneven across the year. Second, even amid significant recovery, Maine’s workforce is not uniformly prospering. The state’s unemployment rate is still higher than it has been in a decade, and twice what it was at this time last year. Initial unemployment claims filed—an indicator of new job loss—have been rising since October, with more Mainers filing new claims in January 2021 than in June or July of 2020.

As a result, unemployment supports, like the enhanced unemployment insurance benefits extended under the American Rescue Plan are critical for many Maine families. Importantly, the Plan also introduced a new tax waiver on the first $10,200 in unemployment benefits received by an individual—or a combined $20,400 for joint-filing married couples who both received unemployment benefits—with adjusted gross income under $150,000 in 2020. While available data on Maine income in 2020 is not especially reliable, even in the more prosperous preceding period (2015-2019), 89 percent of Maine families with at least one working age adult reported earnings below this level, suggesting that this tax break could be wide reaching. Finally, additional supports targeted to low- and moderate-income families, like the expanded Child Tax Credit and nutrition supports, will also serve to fill gaps that the pandemic-era job market has wrought for Maine families’ budgets.

This Data Glimpse draws on recent data from the Regional and State Unemployment 2020 Annual Averages report from the U.S. Bureau of Labor Statistics (BLS). The BLS produces a variety of labor force statistics that were not discussed here, such as employment-to-population ratios, number of jobs by sector, and employment by sector. Additional statistics and visualizations, including for the nation and each state are available through the related Carsey School of Public Policy publication.

1 For more information on annual revisions, see the Technical Note on page 10 of the Regional and State Unemployment – 2020 Annual Averages release: https://www.bls.gov/news.release/pdf/srgune.pdf