This Data Glimpse uses new data from the U.S. Census Bureau’s American Community Survey (ACS), released on September 17, 2020, to update some Maine statistics for 2019 and to identify changes since 2018. According to the ACS, Maine’s 2019 population was 1,344,212 residents—up about 5,000 since 2018 (Table 1). The median age remained unchanged in 2019, at 45.1 years. This median persisted despite small increases in the share of residents in older age groups, because shares of residents in younger middle-age groups also rose. Important for Maine, like in all older states: the share of children and young adults did not decline between 2018 and 2019. 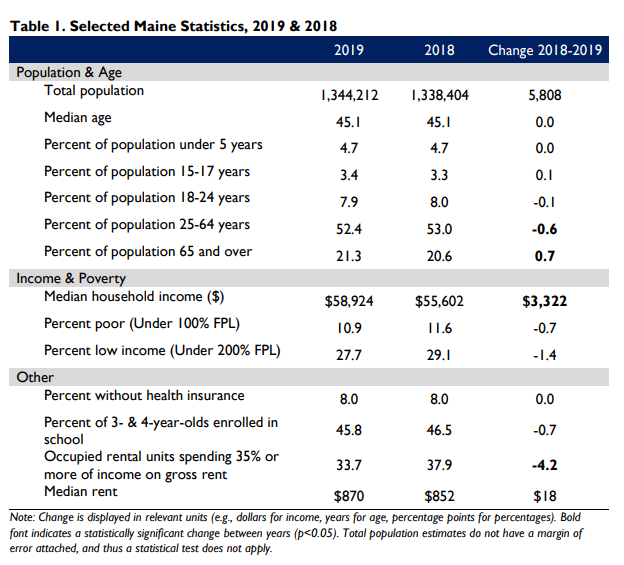 The median income of Maine households increased from $55,602 in 2018 to $58,924 in 2019 (2019 dollars) mirroring the rising income documented nationwide.1 However, into 2019, income levels in Maine are still lower than in New England and the U.S. as a whole (at $77,402 and $65,712, respectively). Despite rising median income, these gains were not realized entirely uniformly, as the share of Mainers living below 100 percent and 200 percent of the federal poverty line (FPL) remained unchanged in 2019. Maine poverty remains lower than the national rate, which stood at 12.3 percent in 2019.

Finally, while there were no changes to the percent of Mainers without health insurance or the share of young Maine children enrolled in pre-school, there was a slight dip in the share of rented households spending at least 35 percent of their income on rent. This decline is likely due to higher incomes in this period, since median gross rent did not change over the year. Importantly, however, the share of rented households that are cost-burdened is still quite high: more than one-third (33.7 percent) spend at least 35 percent of income on rent, although this is lower than in New England or the U.S. (both at 39 percent).

The American Community Survey (ACS) is an annual survey of the United States population conducted by the U.S. Census Bureau. Although the ACS relies on samples of the national population—meaning it is not asked of every person as in the U.S. Census—its large sample size allows for accurate and reliable state-level estimates. The statistics presented in this Data Glimpse are from the 2019 and 2018 ACS 1-year estimates and can be found at data.census.gov.

1The ACS shows increases in national median income, although not quite as extreme as those documented in the 2020 Current Population Survey (CPS) Annual Social and Economic Supplement (ASEC), also released in September, and referencing income in 2019. The ASEC found large increases in household income between 2018 and 2019 both for the U.S. and the Northeast (state-level estimates not available). The Census Bureau expressed some concern about the accuracy of these estimates, noting, “Given data-collection challenges during the pandemic, we are concerned about bias in the 2019 estimates [from the ASEC].” Data for the 2020 ASEC were collected February through April 2020 and suffered from pandemic-related closures and social distancing limitations. Census Bureau calculations suggest that median household income was biased upward, as lower income households tend to require more follow-up efforts, including in-person data collection, that were halted by the pandemic. Bias in the ASEC is especially problematic, as it is the source for official poverty estimates. In contrast, the ACS is exempt from pandemic-related challenges, as its collection concluded in December 2019. That it too documented an increase in household income suggests that at least some of this rise was not merely an artifact of a biased CPS ASEC sample.