This Data Glimpse focuses on an important measurement issue: how the Bureau of Labor Statistics collects official labor force statistics and how these measurements are complicated by the pandemic labor market context. Inspired by the unique uptick in Maine’s July unemployment rate (see Figure 1), we trace how underestimates of the labor force may be artificially suppressing unemployment rates during the pandemic. 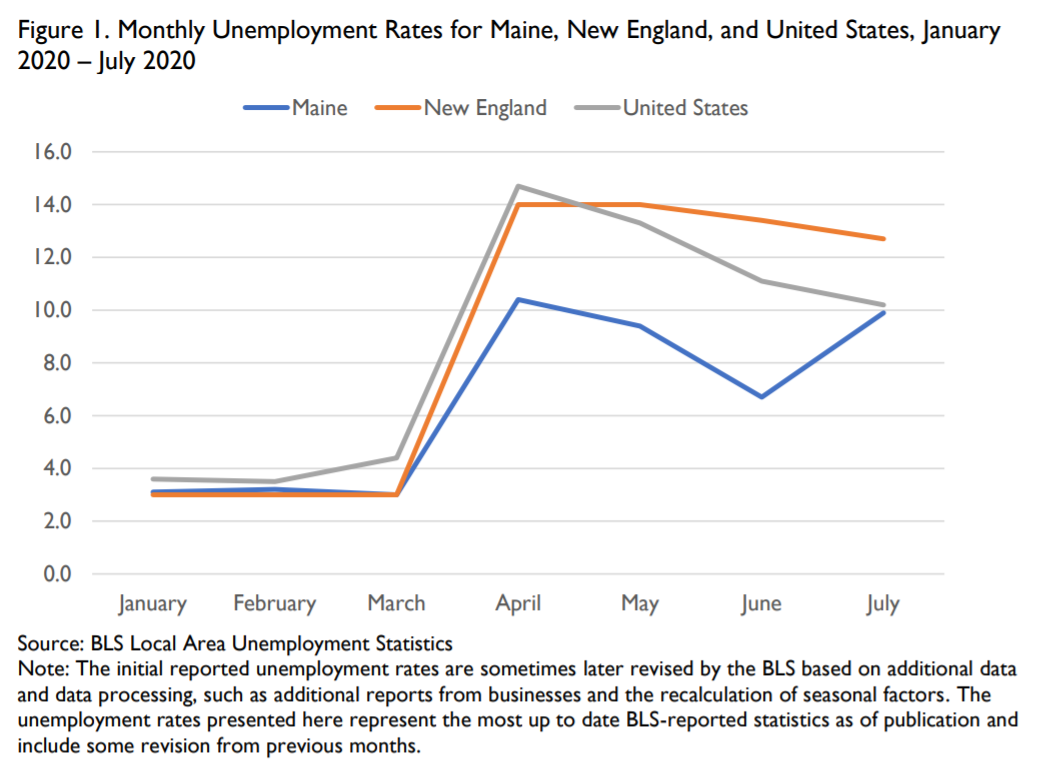 Labor force data suggest the driver of Maine’s uptick was twofold. First, On-the-ground changes in the labor market were partly responsible for this increase. Chiefly, a shipbuilders’ strike in Bath contributed to the loss of 3,500 jobs in the Manufacturing sector from June to July.1 These job losses represent more than one-in-seven of the newly unemployed Mainers in July. Second, Maine’s civilian labor force increased from 669,900 in June to 698,000 in July, which altered
counts of both total workers and unemployed workers used in the official unemployment calculations.2 This phenomenon is explored in more detail below.

The U.S. Bureau of Labor Statistics (BLS) collects labor force statistics through the Current Population Survey (CPS). Survey respondents are asked basic demographic questions as well as information about their employment situation over the “reference week,” which is usually the previous week. Unemployment may be colloquially defined as “those who do not have a job,” but the technical definition is more nuanced. To be considered “unemployed” a person must not have a job and (1) be available for work and (2) have engaged in at least one active job search activity in the last four weeks. To be considered ‘available for work,” a person must be able to start a job if they were offered one. (For example, a parent without child care might be unavailable for work). Active job search activities include interviewing with employers, contacting an employment agency or employment center, submitting resumes, filling out job applications, or otherwise actively searching for a job.3 An exception to the active job search requirement is made for temporarily laid-off workers who expect to be recalled to work; these workers are considered unemployed, even if they are not searching for another job. If the respondent does not have a job but is either not available for work or has not been actively looking for a job, they are considered “not in the labor force,” and excluded from unemployment calculations (see below):

In usual times, labor force nonparticipation encompasses retirees, stay-at-home parents, people with disabilities, volunteers, interns, and people enrolled in school or training without accompanying employment (among others).4 In the present context, this also includes people who are ill, those who are precluded from work by health risks, those caring for sick family members, or those caring for children. The relationships between work activity, availability, and official labor force status are summarized in Figure 2, below. 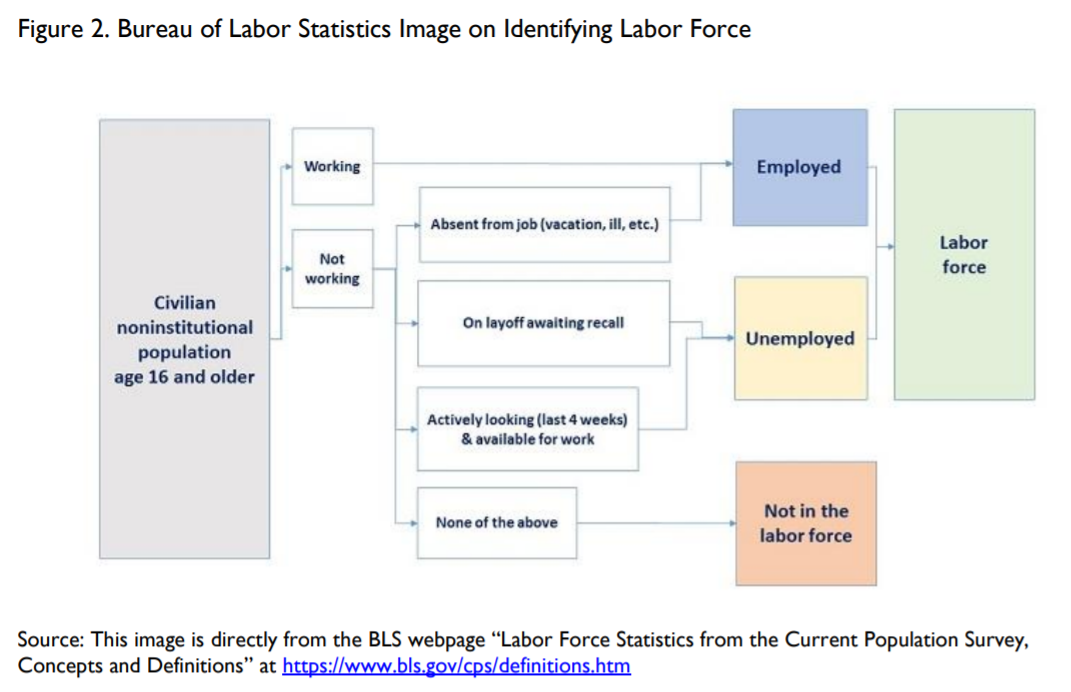 The size of Maine’s civilian labor force was consistent between January and March 2020 but decreased drastically in April (as shown in Figure 3). Maine’s labor force saw minor changes in May and June, before a big increase in July returned the labor force size to pre-pandemic levels. Given BLS definitions, the April labor force constriction was likely due to a combination of people who were no longer available to work, and those who were not working and available to work but had not yet begun actively looking for a job. 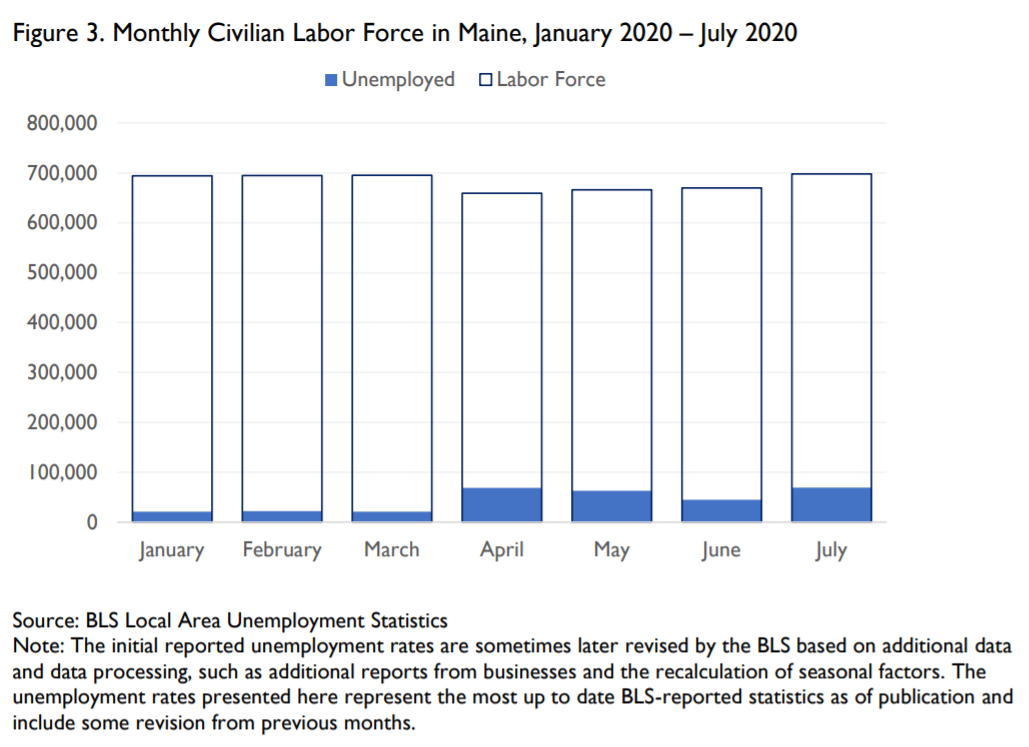 Although not reliably available for Maine specifically, national BLS data identifies people’s reasons for not being in the labor force. Survey respondents who want a job but are not working and have not looked for work in the past four weeks are asked to select their main reason for not looking for work. These options included items like “believes no work available in area of expertise,” “family responsibilities,” and “ill-health, physical disability.” Survey respondents in April through July 2020 indicate remarkably varied answers to this question, with no clearly dominant response, aside from “other,” selected by 45% of respondents. The pandemic was not included on the list of options, so it is possible that pandemic-induced factors such as concerns over personal health and safety might be captured in this “other” category. That some feature of the pandemic drove this response is supported by the fact that the number of “other” responses spiked in April and has decreased into July. To better understand the impact of the pandemic on the labor market specifically, the BLS added five questions to the Current Population Survey starting in May,5 asking people specifically whether they were not looking for work because of the pandemic. Unlike the questions discussed above, these items are asked of all people not working and not looking for work, regardless of whether they want a job. Nationwide, 9.5 percent of those not in the labor force did not look for work because of the pandemic; by July, that figure had fallen to 6.5 percent. This supports the idea that more people were leaving the labor force due to COVID19 and its impacts towards the beginning of the pandemic.