This Data Glimpse describes Maine’s unemployment situation in July, drawing on new data published by the Bureau of Labor Statistics on August 21, 2020. For the most timely indicator— weekly initial unemployment insurance claims—data are available for Maine through August 15, 2020. 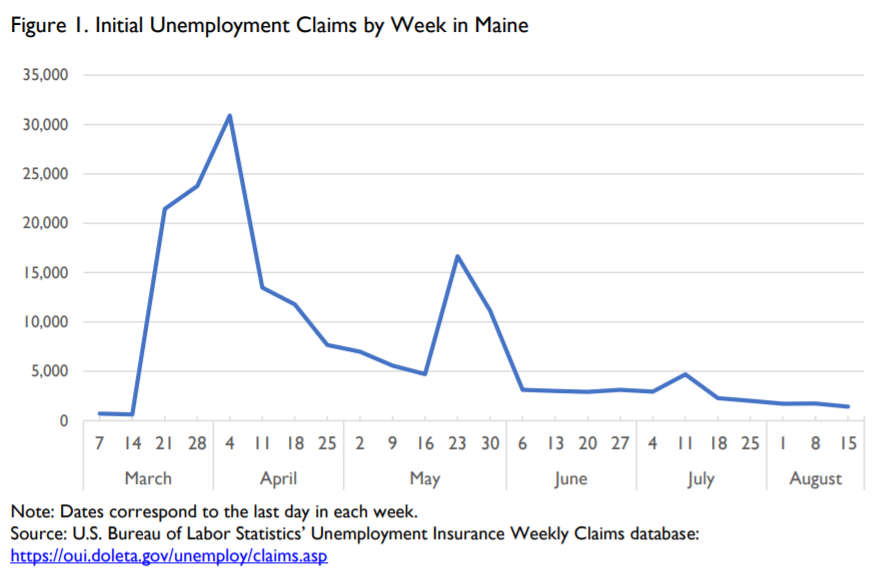 Figure 2 compares Maine with New England and the United States over this same five-month period. To facilitate comparison, the graph shows weekly claims as a share of the total February 2020 labor force in each region. The February 2020 labor force is used as an estimate of the “usual” labor force, pre-pandemic. Since the beginning of June, all three regions have seen an overall downward trend in the number of weekly initial unemployment insurance claims. Despite the reduction in new initial unemployment claims in recent months, the total number of initial claims filed in Maine since March 8 is massive, at 197,705 initial claims, equaling 28.7 percent of the February labor force. Each initial claim generally represents one person, but as the pandemic continues there may be more people who are applying for unemployment insurance a second time due largely to workplaces reopening and subsequently reclosing. 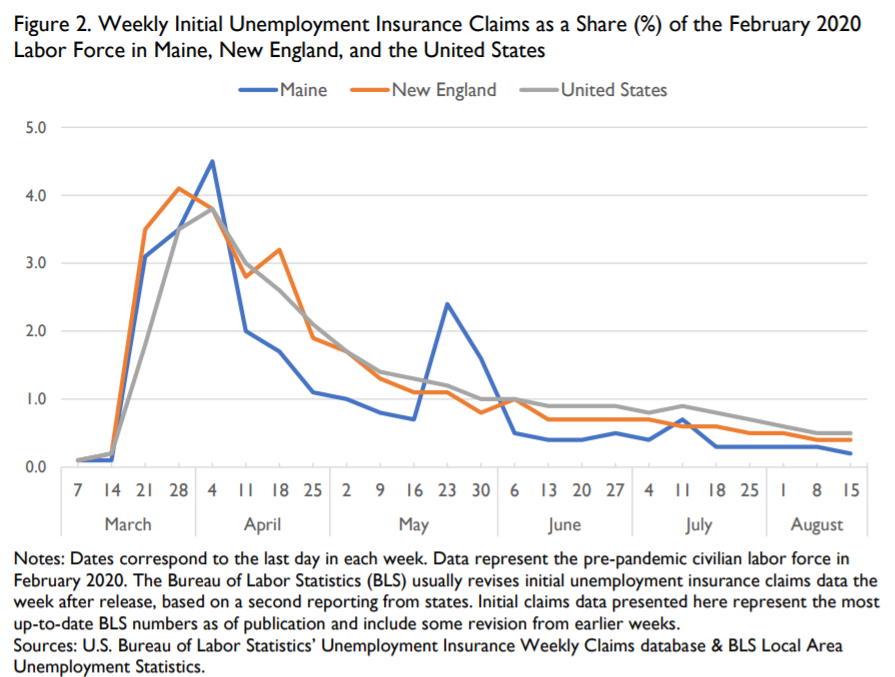 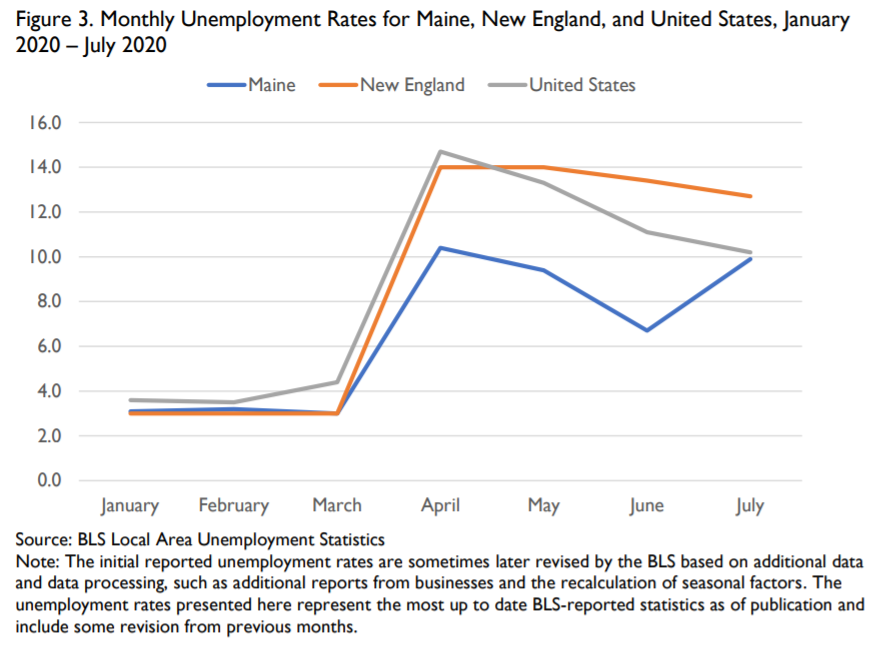 Figure 4 shows more detail for each New England state between March and July. From June to July, unemployment rates dropped in Massachusetts, New Hampshire, Rhode Island, and Vermont, while Connecticut and Maine experienced increases over this same period. As noted above, Maine’s increase was the steepest. Substantial job losses in Maine’s Manufacturing sector appeared to drive this spike, which the Maine Department of Labor has attributed to a shipbuilders’ strike in Bath (see Figure 5). Massachusetts continues to have the highest unemployment rate in New England at 16.1 percent—higher than every other New England state by almost five percentage points. Despite June to July changes, unemployment rates remain much higher across New England than in the beginning of the pandemic and pre-pandemic. 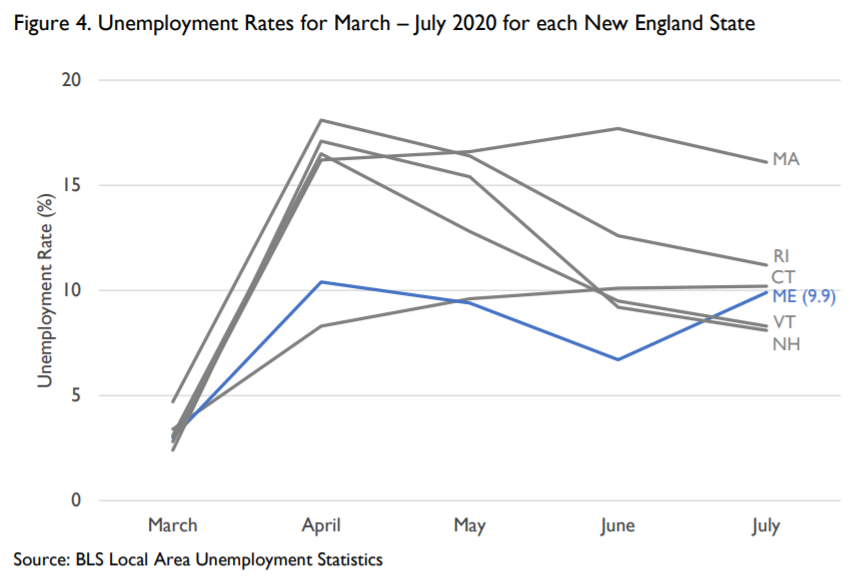 This section describes job losses by sector, using the BLS’s Current Employment Statistics program, a monthly survey of businesses and government agencies that collects data on payroll employment, hours, and earnings. The change in the estimated number of jobs by sector from June 2020 to July 2020 gives a sense of which industries are being hardest hit, which are recovering, and which are less affected.

Maine gained 10,100 non-farm jobs in July but did not see gains in all sectors (as shown in Figure 5). Maine job losses were primarily driven by the substantial loss of 3,500 jobs in the Manufacturing sector, likely due to shipbuilders striking in Bath. These job losses represent a 6.6 percent change in employment in the Manufacturing sector from June to July—the largest percent change in any state’s Manufacturing sector in July. (Nationwide, the Manufacturing sector experienced a modest gain). After two months of job losses, Maine’s Government sector led July gains, adding 5,800 jobs. About 80 percent of these gains were in local government, and 20 percent in federal government employment, with no changes to state government employment. This is a departure from earlier months where local government job cuts drove losses in the Government sector, both in Maine and nationally. The Leisure and Hospitality sector reported the second-largest July job gains in Maine with an added 5,600 jobs. While job gains continue, the number of jobs in the United States and in Maine is still far lower than in February 2020 before the pandemic. 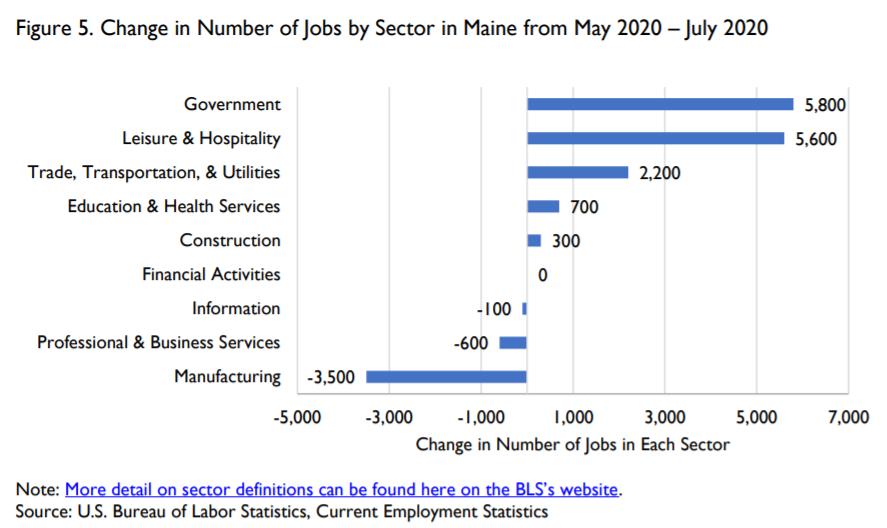 The United States gained 1.8 million non-farm jobs in July 2020, though not all sectors reported gains. While national net gain is a marker of progress, the July increase is much lower than June’s 4.8 million jobs gain, supported by gains in all sectors. For the third month, the Leisure and Hospitality sector led U.S. job gains in July with an added 592,000 jobs. The second-largest gains were in the Government sector (adding 301,000 jobs), and as in Maine, 80 percent were concentrated in local government. The largest losses nationally were in the Information sector, with 15,000 fewer jobs in July. All New England states saw net job gains across all non-farm employment from June to July, although none have recovered to their February levels. The Leisure and Hospitality sector led job gains in Connecticut, Massachusetts, New Hampshire, and Rhode Island, while the Government sector led job gains in Vermont and Maine. Rhode Island was the only New England state to not report any job losses in any sector. Like in Maine, New Hampshire reported highest job losses in the Manufacturing sector. Across the other New England states, loss leaders were less patterned—in Professional & Business Services (Massachusetts), Government (Connecticut), and Construction (Vermont). Chart 1 in the full Carsey report has more detail on each state.

Although unemployment rates are still quite high, the July statistics build on the positive progress made in May and June. Like in the past few months, July again delivers net job gains in Maine, New England, and nationally. A hit to manufacturing jobs amidst a shipbuilders’ strike in Maine contributes to job losses and the increase in the unemployment rate. This increase puts Maine closer to the middle range of unemployment rates among New England states. (Note, however, the strike ended August 23 when shipbuilders voted to approve a new three-year contract and they have since returned to work). Despite a slight decrease in unemployment rate, Massachusetts maintains the highest rate in New England while New Hampshire reports the lowest rate in July.

July job gains in Maine and New England also continue May and June’s progress in lower-paid sectors, like Leisure and Hospitality, which were hard hit with huge job losses in the spring. These job gains are essential for supporting lower-wage workers who are the least likely to have the resources needed to sustain a long period of unemployment. Growth in these industries continues to be important as federal supports for unemployed and lower-earning adults remain largely stalled. Also important in the next several weeks is the uncertainty around school re-openings, both for educators and for working parents who may find their employment capacity strained by another season of remote learning. Finally, as fears that re-populated schools and universities could trigger another spike in COVID-19 cases, both health concerns and fear of triggering another shutdown weigh heavily on parents, educators, workers, and employers.

Although national-level labor market statistics for July 2020 have been available for a few weeks, the U.S. Bureau of Labor Statistics (BLS) released statistics for all 50 states on August 21. This release includes unemployment insurance claims, unemployment rate, number of jobs by sector, and employment by sector. Additional statistics and visualizations, including for the nation and each state are available through the related Carsey School of Public Policy publication.