The U.S. Census Bureau’s Household Pulse Survey is a unique source of timely data on how households are faring across the United States and in each state during the pandemic. Topics include household income and employment changes, mental health, food insufficiency, and the shift to remote learning. In this data glimpse, we use these new data to explore remote learning shifts in New England and the United States.

All remote learning questions were asked of adults 18 years or older who live in households with children who were enrolled in public or private school in February 2020. The data considered here are from May 21 – May 26, 2020 for New England and the United States. Although data are available for Maine, most estimates for the state are unreliable, due to small sample sizes, described below.

Pandemic’s Effects on Educational Delivery Methods
Nationwide, most adults in households with children in school reported pandemic-related changes to their children’s education, with three-quarters reporting that the pandemic meant classes normally taught in person moved to a distance-learning online format (Figure 1). Forty percent of adults reported that classes normally taught in person were altogether cancelled (although this could refer to a subset of children’s classes only). A small share reported the use of paper materials delivered to children. In New England, patterns were similar, but more likely to have online instruction and less likely to use paper than nationwide. 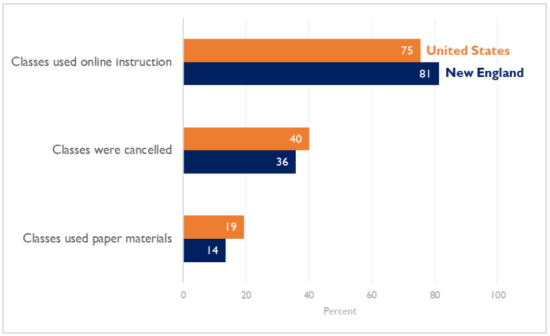 Note: Includes adults who report at least one child in their household was in public or private school in February 2020. About 1 percent of adults in households with school children did not respond to the question on educational delivery methods. Respondents could select more than one answer.

Nationwide, more than one-third of those reporting some household computer or digital device availability, said that a device had been provided by the children’s school or school district for home use outside of school — a similar share as in New England. (This includes adults who reported that in their household a computer or digital device is “always”, “usually”, “sometimes”, or “rarely” available for educational purposes, but excludes those who reported that a device is “never” available.) However, because respondents could indicate multiple responses, referring to multiple devices, it is unclear whether school-issued devices are most often found in households that already have at least one device, or whether these devices are intentionally filling digital access gaps.